I stumbled upon this article at The Economic Collapse blog today, and then I came across this… 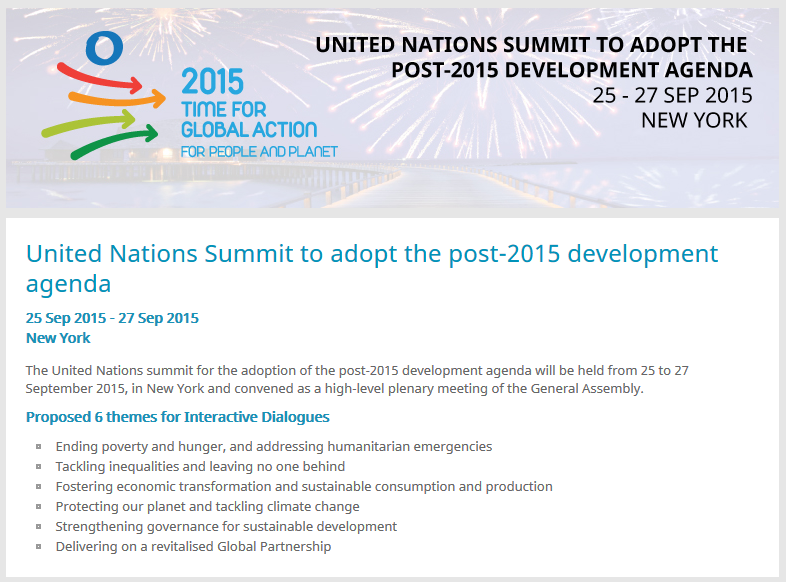 …Essentially, it is a meeting to publicly launch the New World Order.

Looking to the left side of the page, the steps of the “Post 2015 process” are given, and the next step is the “Follow up and review” meeting which concludes on May 22. This is followed by a three-stage “Intergovernmental negotiations on the outcome document” process which begins on June 22…

Speaking of 22s, recall from Update 9 that the Pope is scheduled to arrive in Washington D.C. on September 22, specifically in the evening. I wouldn’t be surprised if his plane landed at twilight, thus symbolizing the twilight of American global leadership. If that’s not enough symbolism for you, he will address the UN General Assembly in the morning (the “dawn of a new day”) of September 25, just 3 days later… 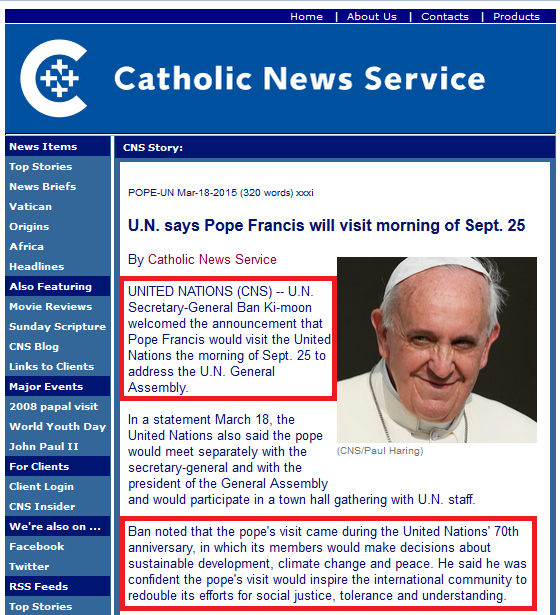 This symbolically mimics Jesus’ death and resurrection. The (American-led Interim) World Order will die on the cross on September 22, and the (UN-led New) World Order will be resurrected on the third day. My, how the “elite” love their silly little bullsh*t.

The next financial crisis may publicly begin on June 4

As you may have noticed in the news, Greece had to raid their IMF piggy bank in order to make their May 11 payment to the IMF. Here is a little snippet from Reuters…

>>> With Athens trying to scrape together all public cash reserves to pay pensions and wages this month, the method used to make the IMF payment underlined the government’s predicament.

Greece drew on reserves from the IMF that are denominated in Special Drawing Rights (SDR), a basket of international currencies, which a Greek central bank official said was done with the Fund’s approval. The account must be replenished within weeks. <<<

So not only must the Greeks replenish the piggy bank “within weeks,” they must also make dramatically higher payments to the IMF and the European institutions over the next two months. I found this schedule of Greek payments on Zero Hedge…

…So here are the amounts of Greek external payments in millions of Euros:

Greece had to scrape the bottom of their financial barrel to make this month’s 768 million euro payment, so how are they going to come up with twice as much between June 4 and June 18 and replenish their IMF account to boot? How will they manage to pay their crushing July payments? Barring the rumored advance payment on the Russian pipeline, they won’t. So the financial train wreck that will kick off the next phase of the economic crisis will likely occur in the June 4 – 18 timeframe.

With this in mind, let’s have a look at the Federal Reserve’s FOMC meeting schedule…

It’s notable that the June and September meetings are “associated with a Summary of Economic Projections and a press conference by the Chair.” Since the public has been told that the Fed’s decision to raise interest rates will be “data dependent,” and since Yellen will want to give a speech when the increase occurs, these two meetings are the most likely times for the Fed to push the button. So how will this play in to what is happening in Europe right now?

Based on what I see now, my best guess is that Greece will default in June and thus kick off a wave of fallout events over the following months. The Greeks will then go to the BRICS Summit in early July to join the BRICS Bank and restart their economy with the drachma and BRICS loans. We’ve already seen the globalists plant the seed for this in the public mind. With all this in motion, the Fed will then trigger the New Lehman Moment with a September rate hike. This means the world will be in serious crisis right before the Pope and the UN meet on September 25. The “heroes” will be in place to “save the day.”

I would encourage you to have your emergency preparations in place by the end of May and to maintain a full readiness posture through September. Don’t be afraid, though. Remember, it’s all a show.

In light of the NWO launch meeting at the UN on September 25 – 27, it is illuminating to consider two dates that closely follow it:

1) Four days after the meeting, on October 1, the US government begins its new fiscal year, and the Establishment have set up the conditions for another 2013-style government shutdown…

> They have staged another debt limit crisis, just like 2013. Here is an excerpt from an April 10 article from The Blaze…

The statutory ceiling on borrowing was reached more than three weeks ago. The Treasury Department just stopped the clock on March 15. The total debt of the U.S. government remains at $18,112,975,000,000, which is $25 million below the statutory limit.

In due course Congress will take up the issue of raising the debt ceiling. That will open the gates for front-page stories about a divided Republican Party risking a default and crashing credit markets across the globe.

Some will try to use this vote to force policy changes such as ending Obamacare or unfunding President Barack Obama’s amnesty changes. The president will promise to veto any bill that does more than raise the ceiling. <<<

> They have positioned the political parties for another non-election year budget showdown over Obamacare and other divisive issues, just like 2013. Here is an excerpt from a May 5 article from Yahoo News…

>>> The Senate passed a budget plan on Tuesday, making this the first time Congress has approved a budget outline in six years. The House passed the plan last week.

So Congress is doing its job, right?

Not exactly. What Congress produced was a GOP budget road map, passed by Republicans – a statement of GOP values. Once it hits the legislative road as spending bills, Senate Democrats will probably throw up barricades (and conservatives in both chambers might, too). Another budget crisis could ensue, even a government shutdown. <<<

Given this setup, there is a very high probability that a shutdown will occur. It would set the stage for the next big event…

At this meeting, we are likely to see the globalists add China’s currency to the SDR and bypass the US veto to enact long-delayed “governance reforms.” The combination of an economic crisis publicly attributed to the Federal Reserve’s policies and a US government shutdown caused by partisan bickering will provide the perfect pretext to finally end “American leadership” of the IMF/World Bank/UN (needless to say, these organizations have never really been American-led; they’ve always been bankster/globalist-led with America serving as their temporary vehicle for consolidating power). The globalists launched the whole “it’s time for a de-Americanized world” propaganda theme in the wake of the last US government shutdown. Will they now finish the job with the next shutdown?

For more information on the China/renminbi/IMF scenario and its impact on the US, see these entries…

Globalist Agenda Watch 2015: Update 3 – This episode of “Bend over, here it comes” is brought to you by Citibank (see Update 2 – “What East versus West conflict? The West is helping China’s renminbi to become a reserve currency”)

Much love to you.