I’m not going to say “I told you so”; I’ll just say I told you this back in November of last year…

If we look at the most powerful grouping in the United Nations, the UN Security Council’s permanent members, we see that three of the five seats will be held by Putin-friendly countries in early 2017 (Russia, China, and Trump’s US). And once Le Pen is elected in the April-May French election, FOUR will be in NWO hands. That leaves the UK.

A recent court ruling has required the UK parliament to vote on the BREXIT before proceeding, and Prime Minister May has publicly stated that parliament must accept that the BREXIT vote was legitimate. So here’s my prediction…

> Parliament will vote on the BREXIT in 2017, and they will go against the result of the referendum. There will be outrage.

> May will then schedule a snap election for sometime in 2017.

> A Farage-like anti-Establishment figure will emerge as the new PM.

This will put all the veto-wielding UN Security Council seats in Putin-friendly hands. – From Globalist Agenda Watch 2016: Update 24

When it comes to the BREXIT trigger for the election, I think the parliament down-vote was their original strategy, but they bypassed that particular trigger because it was exposed. Now they’re using the relatively weak excuse of “we need a strong mandate for the Brexit negotiations,” so their reason is still Brexit-related.

As for the result of the election, there are three ways the globalists can get a Putin-friendly person into the UK’s UN Security Council seat…

1) By (s)electing Jeremy Corbyn. This is the most likely outcome because it will also fulfill their goal of splitting-off Scotland. See Update 8 – The globalist strategy for the French and UK elections for the details of this scenario.

2) By reelecting May, then electing Corbyn during or after the Big Crisis. This is the least likely approach, but it’s nonetheless possible.

3) By reelecting May and then having her do a Trump-like reversal toward Putin. She would justify it “in light of recent events and revelations…” And it would be primarily because of Putin’s “brilliant strategizing and leadership” in saving Europe from Erdogan’s Holy War.

3) They can elect Macron and have him do a reversal.

With the evolving circumstances, the globalists see the opportunity of electing two communists (Melenchon and Corbyn) and using them to start the economic crisis (and take the resulting blame). I think that’s one of the reasons they’re engineering a “surge” for Melenchon in France. And even though their election, words and/or actions would be blamed for touching off the final collapse of the old financial system, they’d stay in office long-enough to facilitate the “emergency UN reform.”

No matter how much the globalists shuffle around their trigger points and contingency plans, and regardless of whether their plan unfolds over the next few months or the next few years, the end results they’re seeking are unchangeable…

1) To have all 5 permanent members of the UN Security Council ready to give up their unilateral veto powers so something like the Big Crisis (the coming economic catastrophe and nuke-threatening Holy War) “will never happen again.”

2) To have all 5 permanent members of the UN Security Council on board with “reforming” the UN to “make it more representative and fair” and “make it stronger and better able to prevent unilateral challenges to world peace.”

3) To have all 5 permanent members of the UN Security Council support Putin’s leadership of the “new” UN (which is the Rockefeller-planned New World Order).

In this update, I’ll be talking about the coming North Korea nuclear scare vis-a-vis the globalists’ UFO / Space Aliens Psyop. But before anyone’s eyes glaze over due to “all talk of UFOs is for nutters” programming, I’d like to point out that the “UFO disclosure movement” is a disinformation front that was started by one of the architects of the NWO implementation plan, Laurance Rockefeller, and it is very much an official part of the NWO strategy. So in this short update, I’ll show you why they started the movement and how it relates to what’s happening right now in North Korea.

Do you remember in February of last year when…

the CIA released its UFO files

North Korea was in the news due to their supposed H-bomb development and pending missile test?

During all that, I wrote The CIA, the X-Files, and the North Korean H-bomb: A coordinated campaign? And in it, I mentioned this…

…when North Korea conducts either the currently-planned or a future missile launch, will a “mysterious object” (UFO) be spotted near it before it explodes in midair or crashes harmlessly into the ocean?…

More than anything, the globalists want you to believe in benevolent aliens, at least for now. This is because they are planning to send in their electrogravitic craft and GMO humanoids (posing as UFOs and aliens) to save us from a staged nuclear exchange this September. They want to totally blow people’s minds, and once those minds are blown, they will construct a new paradigm in them which will facilitate the rest of their “End Times” agenda.

So if you hear talk of “unknown forces” stopping a nuclear disaster during the North Korea Show, that’s what the globalists are setting up. The “unknown forces” would likely not show up again until the second nuclear crisis in Turkey, and then, they’d introduce themselves.

The whole purpose of the UFO / Space Alien Psyop is to blow people’s minds and open them up to new possibilities, including the possibility that Putin is the Messiah and Assad is the Mahdi. Without something happening to blast people out of their mundane workaday reality, such claims about Putin and Assad would be met with scorn. But if “ETs” show up to either break the news or corroborate it, that’s another matter entirely.

That being said, is there another way for the globalists to approach the whole Messiah / Mahdi / Space Aliens Psyop?

– Yes there is, and I call it the “keep it on the down-low scenario,” or more simply, the “low road.” This is how it would unfold…

> There would be no big, formal attempt to herald the arrival of the Messiah and the Mahdi after the Holy War. They would simply let the geopolitical script play out, then have their Jewish, Christian, and Muslim prophecy propaganda corps start “noticing” that the prophecies have been fulfilled in Putin and Assad. This would be built up in the public mind over the first couple of years of the NWO.

> They would continue preparing the public for a faked ET arrival by announcing that life has been conclusively found on another planet or moon and by discovering “Planet 9” and its moon(s). The “Planet 9 aliens” would then show themselves some time during either the first couple of years of the NWO or near its 7 year end-point. Given that the public is being programmed to expect Planet 9’s discovery in 2018 or so, that’s a good estimate for when they’ll trigger the Psyop… 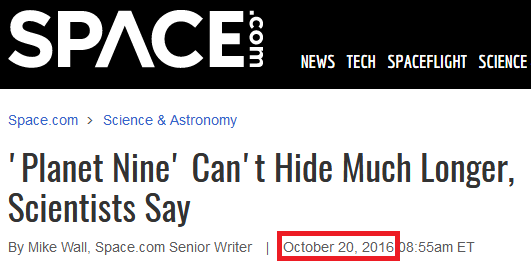 …From Space.com. Here is an excerpt…

“Planet Nine’s days of lurking unseen in the dark depths of the outer solar system may be numbered.

The hypothetical giant planet, which is thought to be about 10 times more massive than Earth, will be discovered within 16 months or so, astronomer Mike Brown predicted.”

To read more about how “Planet 9″ figures into the UFO / Space Aliens Psyop, read these entries…

JUST 3 DAYS TILL THE FIRST CRISIS THRESHOLD OF 2017

In three short days, we’ll face the first of four trigger dates that could set off the Big Crisis this year: April 23, April 25, April 28, and May 7. Let’s look at what could happen with each one…

> April 23: The First Round of the French Presidential Election – If Le Pen is one of the top two vote-getters (thus qualifying for the runoff), we could see…

immediate migrant riots and “lone wolf terrorist acts” in France
…leading to…
allegations of police brutality and harassment against Muslims
…leading to…
Erdogan “releasing the hounds” and kicking off the Holy War / “European Islamist Intifada.”

> April 25: The Second Round of the US-North Korea Nuclear Confrontation…

We may see a North Korean nuclear test on that day, and it will take place in an environment where “senior US intelligence officials” have threatened a preemptive strike against any nuclear test, Kim Jong-un has threatened a “super-mighty preemptive strike” against the US, and three US aircraft carriers will reportedly be in the vicinity. And note that the Chinese warning also speaks of early May – we’ll get to that in a minute.

> April 28: The US Budget Deadline – In addition to the other reasons I’ve given for a possible government shutdown following this deadline, the potential increase in tensions with North Korea on the 25th provides another reason: a sudden coalition of Congresspersons forming to stop the escalating nuclear confrontation by shutting down the US government. This could lead to the food stamp riots I’ve previously mentioned.

> May 7: The Second Round of the French Presidential Election – In the event that Le Pen qualifies for the runoff and migrant rioting is just enough to piss off the French electorate but not enough to trigger Erdogan, her election on May 7 would definitely get the fireworks going. And if the North Korean nuclear test gets delayed till just before the South Korean presidential election on May 9, we could see sh*tstorms kicked off on both sides of the world at the same time.

All this being said, if we get through this late-April to early-May timeframe without the globalists pulling all these triggers, it might indicate that they’re delaying till autumn or taking the slow boat over the next few years. But if they do pull the triggers, start popping some popcorn, because the show we’ve long awaited will begin shortly.

I may enhance and extend this update today and tomorrow. And I’ll do a new update on the day before the French election (which will be the 22nd, one of the globalists’ favorite days for false-flag attacks).

A reader sent me a link on the upcoming nuclear response exercise Gotham Shield 2017. Upon looking into it, it appears to be a real exercise, and it is already underway… 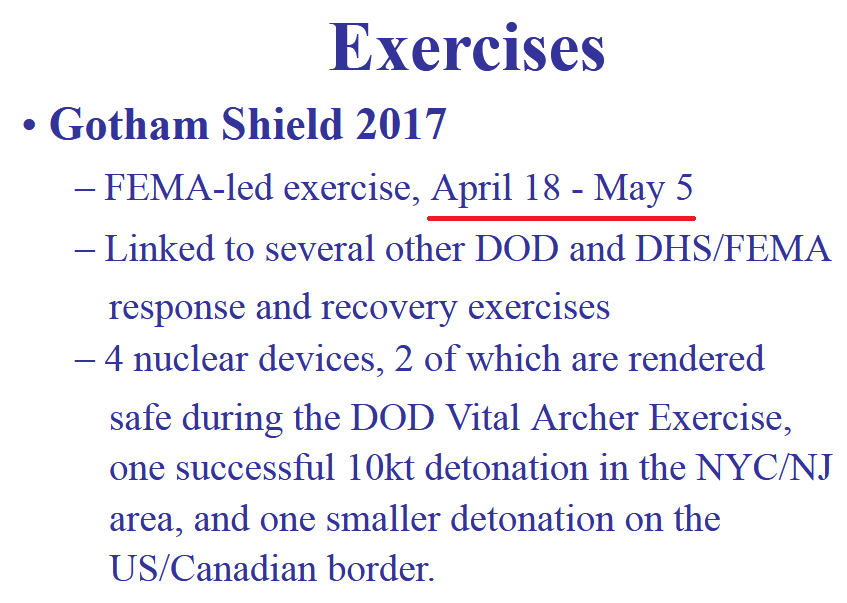 …from a Google cache from the National Response Team website

Normally I’d pay no mind to such a routine exercise, but given that it takes place during the first crisis threshold, that there are ongoing nuclear threats from North Korea, and that the name of the exercise references Batman (which brings back memories of Sandy Hook), I’m a tad uncomfortable with it. I’ll therefore enhance and expand this postscript tomorrow; you can’t be too careful I suppose.

P.P.S. – Whilst brainstorming on Gotham Shield, some questions occurred to me: Will the globalists literally blow up the old UN to build the “new” UN? Technically, North Korea is still at war with the UN, which authorized the US involvement there. If the UN were blown up, would it be rebuilt in New York or relocated to Ordos, China (ordo ab chao)? I’ll cover this tomorrow.