“There is power in the blood of Jesus.”

“My sins were washed clean by Christ’s blood.”

“Cover yourself in the blood of the Lamb”… 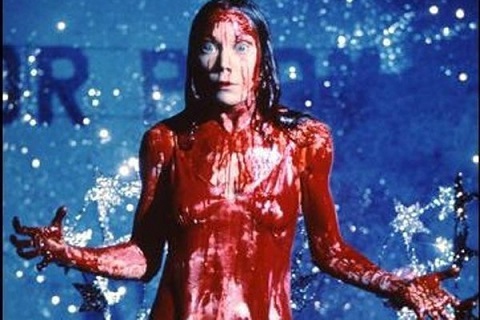 Christians never seem to realize the true meaning of the words they use or why they use them, and I used to be the same way, because I was Christian until I hit my twenties. Now that I’m older and more experienced, though, I’ve learned why such words are spoken, and now so will you.

If you look at the basic Christ concept without rose-colored glasses, this is how it goes…

The first humans did something that God told them to not do, so God condemned all humans to spiritual death. But God told Moses that his chosen people could escape spiritual death if they would kill innocent animals. Since death was required for breaking God’s rules, an animal’s death could be substituted for the human’s death; since the shedding of blood was required for remission of sin, the animal’s blood could be substituted for the human’s blood.

Hebrews 9:22 – And almost all things are by the law purged with blood;
and without shedding of blood is no remission.

Then, along came Jesus. God sent his own son down to Earth and humans murdered him. And because we murdered him, we were offered forgiveness for our sins. Why? Because Jesus became the ultimate human sacrifice for our sins. In the same way innocent animals took on the sins of the Jews, Jesus took on all the sins of the whole world. And when we murdered him, the sins were expiated. So the path to remission of sins is the cold-blooded murder of the innocent, and our murder of God’s own son was a very fortunate day for us.

When you take a moment to step back and think about this, it’s all very bizarre, isn’t it? Eat an apple, be condemned forever; murder God’s own son, all is forgiven. It’s absolutely nuts. So why did people accept such an odd belief? It was because the Christ myth was cobbled together from pre-existing spiritual traditions, so it made sense to people at the time.

1) Scapegoating – an ancient practice whereby the evils or sins of a people were symbolically attached to an animal, then the animal was driven away or killed, thus carrying away the evil or expiating the sin.

2) Blood sacrifice – an insane practice in which a valuable animal or human (such as one’s own child) was killed to make amends for sin or to seek material gain or power. The sacrificed being’s blood was then considered to have the power to purify a person or place…

3) Eating flesh and drinking blood to consume the spirit and/or take on the qualities of an animal or person – this practice is still followed today by hunters who drink the blood or eat the heart of their kill to take on its spirit, and by Asian men who take rhino horn powder in the belief they’ll get an erection.

If we apply these three superstitions to Christianity, we see that Jesus took upon himself all the “sins” of humanity (thus becoming the scapegoat), and he was blood sacrificed on the cross to release those sins. Due to his sacrifice, his believers can wash away their sins by covering themselves in his blood, and they can become more like him by consuming his flesh and drinking his blood in ritual communion.

That’s Judeo-Christianity in a nutshell: shirked responsibility, bloody murder, cannibalism, and vampirism. But are these three spiritual traditions that form its basis valid in any way? Let’s take a moment to think it through.

1) Scapegoating – In determining if scapegoating is spiritually valid, ask yourself a simple question and feel the feedback you get from your spiritual core…

Does God allow people to shirk responsibilities for their words and actions by putting it onto others?

The answer to this question is a clear “no,” isn’t it? Even in our earthly experience as parents, a good parent doesn’t allow a child to deny responsibility by putting it on his sibling or pet. A child who never confronts the consequences of her words and actions never learns to become a better person. So is God a bad parent? Besides, allowing people to put their sins onto others gives the sinner an unlimited license to sin; he can do whatever he wants as long as he can find another being to kill.

In reality, when you try to shift your wrongdoing onto another human or animal, you are adding to your wrongdoing by shirking responsibility. And if you then kill that human or animal to take away your sin, you are committing another sin, that of murder. Scapegoating is primitive bullsh*t, and there is nothing spiritual about it. It is the delusional practice of a*sholes who are trying to avoid the consequences of their bad behavior.

2) Blood sacrifice – In determining if blood sacrifice is spiritually valid, ask yourself a simple question and feel the feedback you get from your spiritual core…

Does covering yourself in the blood of a murdered innocent, whether animal or human, clean away sin or cover you with sin?

Again, it’s pretty clear that you are actually marking yourself as a wrongdoer and a ghastly weirdo when you actually or symbolically cover yourself in the blood of a murdered being. So covering yourself in the blood of Jesus does nothing more than show you are a primitive lunatic. On a personal note, though, I was not above elements of this practice when I was younger. The last time I was “covered in the blood” was when I went down on my Chinese girlfriend during her period (true story). It was kinda chunky, if you know what I mean. I guess that means more sins were being shed.

3) Eating flesh and drinking blood to consume the spirit and/or take on the qualities of an animal or person – If this actually worked, I’d be clucking and scratching about my back yard rather than typing this entry. I eat a lot of chicken.

So as we have so far seen in this series, Christianity is a rather nonsensical belief system cobbled together from the invalid spiritual practices that predated it. It was fashioned over time, beginning with the lies of Moses, continuing on through to the lies of the Roman Empire, and culminating in the Crypto-Jewish lies of today. It is a religion that is, and always has been, about power, control, and parasitism. By claiming a special relationship with — and special revelations from — God, the priestly con artists have lived off of our gullibility for millennia…

Exodus 25 – 1 The LORD said to Moses,
2 “Tell the Israelites to bring me an offering. You are to receive the offering for me from everyone whose heart prompts them to give.
3 These are the offerings you are to receive from them: gold, silver and bronze;
4 blue, purple and scarlet yarn and fine linen; goat hair;
5 ram skins dyed red and another type of durable leather; acacia wood;
6 olive oil for the light; spices for the anointing oil and for the fragrant incense;
7 and onyx stones and other gems to be mounted on the ephod and breastpiece.
8 “Then have them make a sanctuary for me, and I will dwell among them.
9 Make this tabernacle and all its furnishings exactly like the pattern I will show you.

Hmmm… so God needed all these fine and sumptuous material things in order to commune with his people? Or was it Moses who wanted all these things? And was it God or Moses showing a flash of anal-retentiveness in verse 9?

Clearly, it’s all a lie, and all we have to do to end it is collectively wake up to the truth and stop going along with it. But the primary appeal of Christianity has never been intellectual; it has been emotional. So in the next entry on this subject, we’ll explore how the priests and preachers manipulate people’s emotions to sell their religion.