[30 July 2018] – In order for Vladimir Putin to start his 7-year reign as “Antichrist” (“the one who substitutes himself for Christ”), he must defeat a decoy Antichrist at the 7-year mark of the decoy’s reign. Originally, it was planned that Putin would defeat Obama in September of 2016; you can read all about it in “End Times” Programming. And ever since they had to abort that plan, they’ve been trying to cobble something together that will passably fulfill the prophecies.

It now appears that they’ll substitute Erdogan into Obama’s role, with his 7-year mark being reached in late August of 2021, thus placing Putin’s ascension to “world leader” on or about September 15, 2021.

So what does this mean for us? If we continue to hold off their “passing plays” (the Trump-Putin “assassination” attempts), the globalists might grind things out on the ground for another 3 years, during which we’d continue experiencing the decoy “Great Tribulation”: a long economic downturn filled with war tension and chaos that would leave Trump finishing out his presidential term weakened and unwilling or unable to run again. A “Satanic” figure would then ascend to the presidency in January of 2021, and we’d see the climactic battle that August.

I stumbled upon all this while visiting one the major Christian prophecy propaganda sites earlier this month. As I looked through the fanciful bullsh*t on offer, this caught my eye… 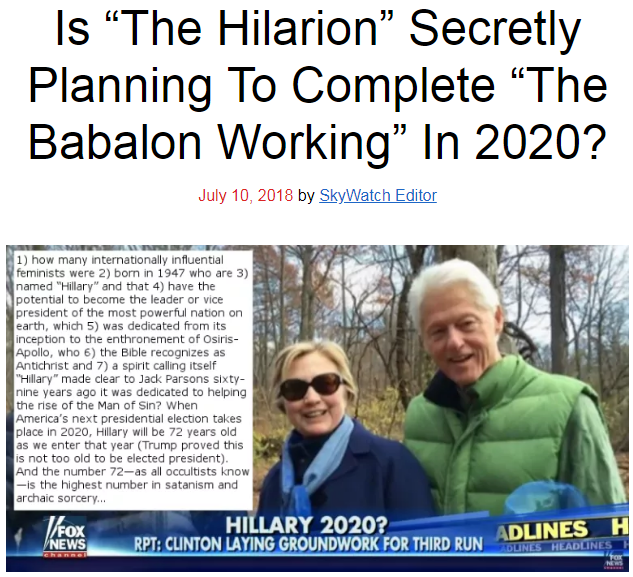 So here we have a globalist mouthpiece site suggesting that Hillary Clinton might run in the next presidential election and help the “Antichrist” take his throne. Here is a bit of what they say about her…

>>> On October 31, 1948, a full sixty-nine years ago when the female child would have been only around one year of age, Parsons wrote that her spirit contacted him, calling itself “Hilarion,” who, he said, would become an international public figure dedicated to bringing the work of the Antichrist to fruition. Why is that important? Because the etymology of Hilarion is the arcane “Hillary.”

I asked myself: 1) how many internationally influential feminists were 2) born in 1947 who are 3) named “Hillary” and that 4) have the potential to become the leader or vice president of the most powerful nation on earth, which 5) was dedicated from its inception to the enthronement of Osiris-Apollo, who 6) the Bible recognizes as Antichrist and 7) a spirit calling itself “Hillary” made clear to Jack Parsons sixty-nine years ago it was dedicated to helping the rise of the Man of Sin?… <<<

The article doesn’t seem to say that Hillary will win the election, but it does suggest that her involvement in the race will “bring the work of the Antichrist to fruition.” So the presidential election could go one of three ways…

1) “Satanist” Hillary Clinton could win with clear signs of election fraud: illegal aliens voting, felons voting, and Soros fixing the vote count. This is the least likely outcome of the election.

2) “Communist” Bernie Sanders could win with the same signs of election fraud. His candidacy would result from a revolt against Hillary by the “progressives” in the Democratic Party. And the fact that he is a stereotypical Jew who won under shady circumstances would help generate virulent “anti-Semitism” in America after he leads us to ruin, which would in turn assist the Kabbalists’ effort to drive American Jews to Israel for the final pogrom. This is the more likely outcome of the election.

3) “Antichrist” Mike Pence could win as a result of mainstream America revolting against a Clinton or communist presidency. Getting Pence into the presidency has been one of the core objectives of the Trump assassination attempts the globalists have been setting up, and his job is to bring us to the brink of full-out nuclear war with Russia before he is defeated (along with his fellow “Antichrist”/”Dajjal” Erdogan). So this is how they make him President if they’re unable to do the assassination show, and it is the most likely outcome of the election… 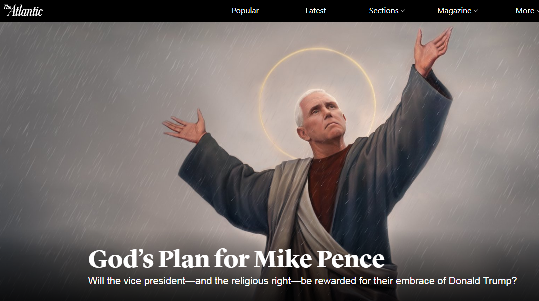 With all this in mind, the task before us is to continue guarding against the pass play (a Trump “assassination”) while also beginning to block their running game (the election play). If we can push them past August 2021, they’ll be fresh out of Antichrist candidates with 7-year cycles behind them. And that would put them in a world of hurt. They’d have to wait until the new US President (presumably Pence) reaches his 7-year mark in 2024 or 2028 (depending on whether or not they count his years as Vice President). Keeping the world situation as it is for 6-10 more years would be a real challenge.

Next, I’ll show you what they’ve done / are doing to extend Erdogan and Putin’s presidential terms through 2028.

To read the previous entry, click here: Tisha B’Av and the Blood Moon.

For the latest information, visit the Home Page.