Have you noticed all of the New World Order talk coming out of the mainstream media since Trump’s win?… 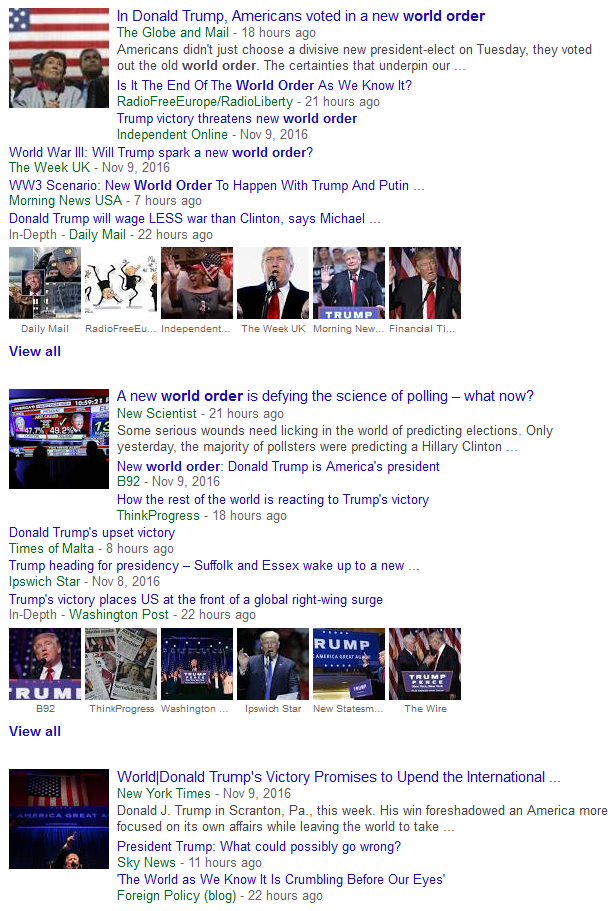 …From a Google News search for world order

Buried amidst all this chatter is a narrative outlining a second, slower path to the New World Order. It would involve bypassing a Western escalation in Syria until Trump is in office and cuts a deal with Putin, then waiting for all the 2017 European elections to install new “right wing” leaders like Le Pen. Once the core of the West has Putin-friendly leaders in place, they can all cut a deal to “reform” the UN and launch the “kinder, gentler” NWO I’ve been warning about.

Of course, this is just the basic, bare bones outline of it; I’ll write more over the next day or two.

If we look at the most powerful grouping in the United Nations, the UN Security Council’s permanent members, we see that three of the five seats will be held by Putin-friendly countries in early 2017 (Russia, China, and Trump’s US). And once Le Pen is elected in the April-May French election, FOUR will be in NWO hands. That leaves the UK.

A recent court ruling has required the UK parliament to vote on the BREXIT before proceeding, and Prime Minister May has publicly stated that parliament must accept that the BREXIT vote was legitimate. So here’s my prediction…

> Parliament will vote on the BREXIT in 2017, and they will go against the result of the referendum. There will be outrage.

> May will then schedule a snap election for sometime in 2017.

> A Farage-like anti-Establishment figure will emerge as the new PM.

This will put all the veto-wielding UN Security Council seats in Putin-friendly hands.