(The October 31 addition is below in red)

(30 October 2018) – If you’ve spent any time on (faux) Truther and (controlled) alt-media sites, you’ve undoubtedly seen lots of breathless warnings based on The Protocols. And the obvious questions you’ve asked yourself as you’ve encountered them are…

Who really wrote these “Protocols”?
…and…
Are they for real?

Over the course of this entry, we’ll answer those questions in a conclusive way. We’ll do so by looking at the clues we can glean from the cover, title page, preface, introduction, and main body of the copy I purchased from Amazon, a company run by a (secretly) “Jewish”/Kabbalist neo-oligarch. The fact that Jeff Bezos is selling copies of a reputed Anti-Semitic hoax book is an interesting clue in and of itself, but I’ll get to that later.

What will follow in the coming hours and days are postings of the clues I find as I systematically study the book Jeff sold me. Once I’ve gone through the whole thing, we’ll look at all the clues and draw some rather obvious conclusions based on what ideas are being sold to the reader. Check back each day; this will be an interesting and enlightening journey. 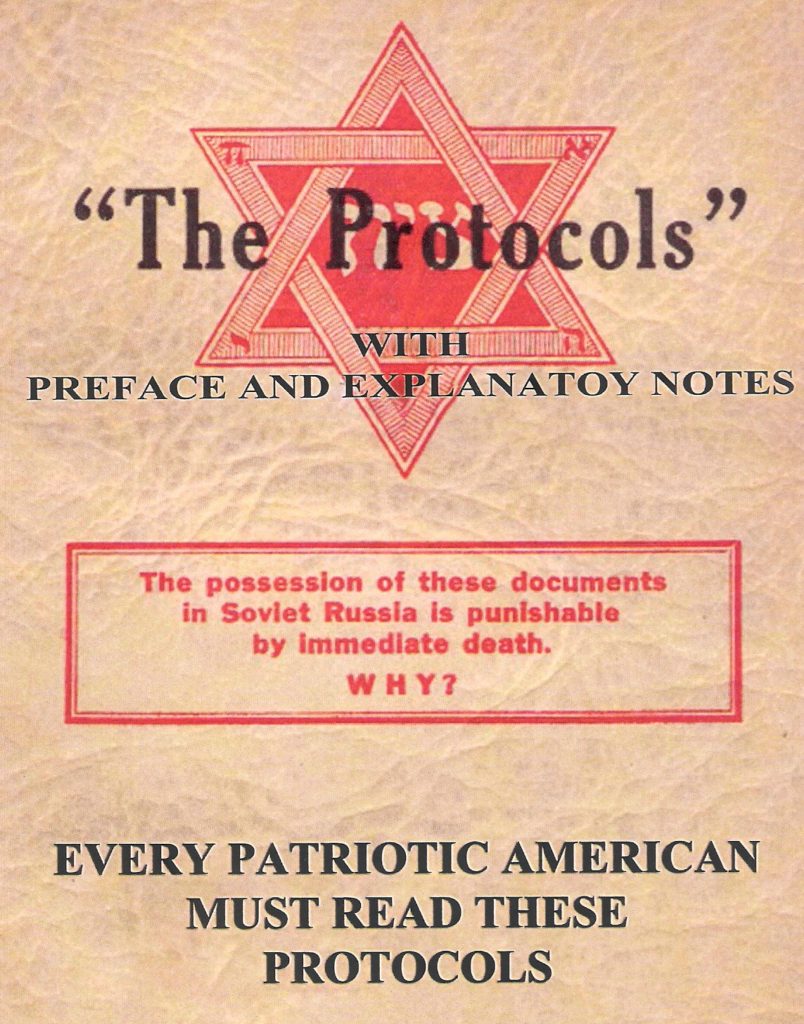 Aside from the missing “R” in EXPLANATORY, which may have been done to make it appear that the book was produced by “amateur patriots,” not slick globalist disinfo agents, the first two clues slap us right in the face.

Clue 1, from the text blocked in red, is that the producers of the book want the reader to believe that “the communists don’t want you to have this information.”

Clue 2, from the text at the bottom, is that the producers of the book are targeting “patriotic Americans” with their information and interpretations. So it is meant to (dis) inform those who are rebelling against the current globalist establishment.

There may also be a clue in the specific Star of David symbol shown on the cover. I’ll look into it. 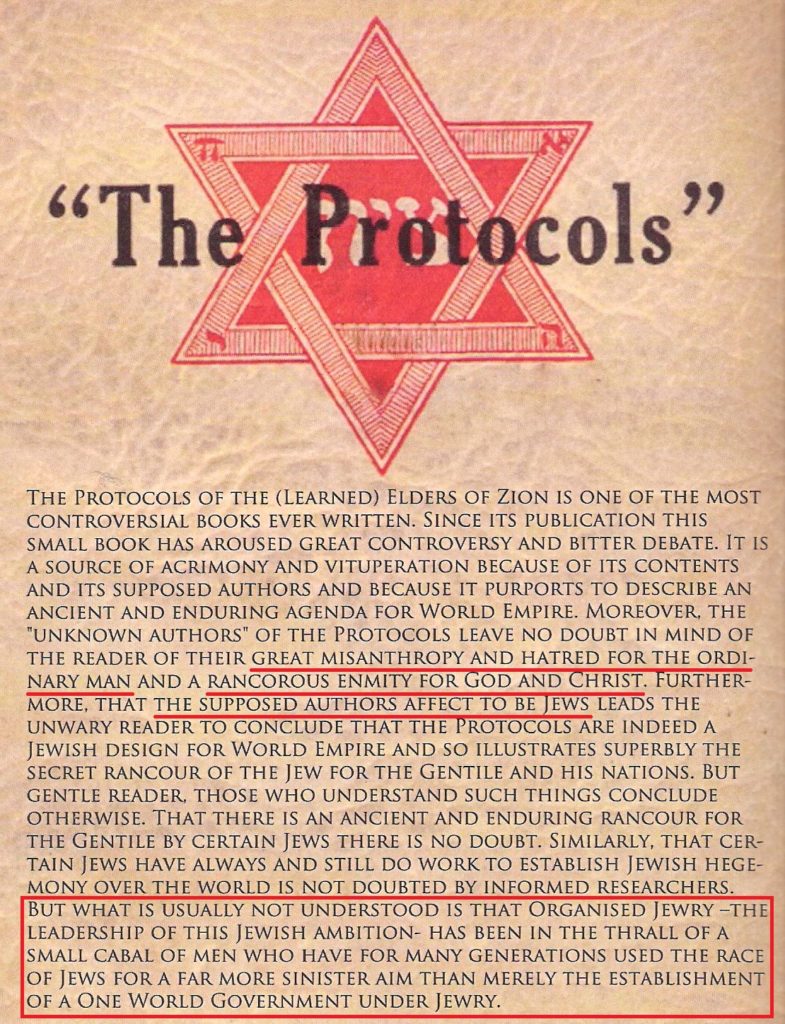 From the all-caps eyesore of a blurb it offers, we get the next four clues. In the first three, the producers of the book want the reader to believe that…

From these three clues, it almost sounds like the “Elders” are Satanists, doesn’t it? After all, Satan supposedly hates the human race and has a rancorous enmity for God and Christ, right?

The last clue on the back cover, Clue 6, is that the producers of the book suggest that the Jewish race is being used to achieve “a far more sinister aim than merely the establishment of a One World Government under Jewry.”

So what could be “far more sinister” than a One World Jewish Government?

To find the answer to this, I decided to look at the final page of the book, page 101. There I found a section titled “King of the Jews,” who is described as the master of humanity. And if you pair that with a word mentioned on the title page of the book, you get Clue 7… 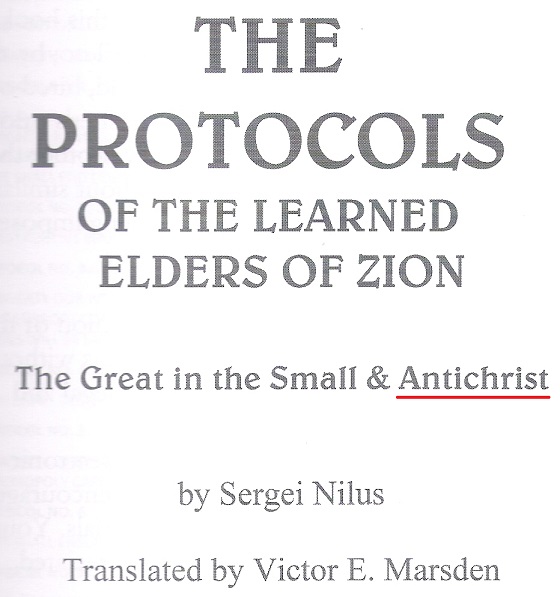 So Clue 7 is that the producers of the book suggest that the ultimate aim of the “Elders” is to install an Antichrist “King of the Jews” as the master of humanity.

With these first 7 clues set before them, longtime readers of this blog should already realize exactly why this book was written and how it fits into the globalist plan. In case you aren’t a longtime reader, though, I’ll spell it out in the next addition.

(31 October 2018) – Since late-2015, this blog has been dedicated to uncovering, documenting and exposing the globalist scheme to artificially fulfill religious prophecies. And over the course of studying their Plan, I’ve learned that it has two phases:

In Phase 1, they have been presenting a decoy Satanic front in the West so they can have Vladimir Putin defeat it and pose as the Jewish and Christian Messiah. As for who will play the decoy Antichrist whom Putin will vanquish, it will most likely be Mike Pence or a “fallen” Donald Trump.

In Phase 2, they will expose Vladimir Putin as the “real Antichrist” who has “usurped Jesus’ throne in Jerusalem,” and they’ll bring in their Kabbalist god-king to defeat Putin and pose as the “real Jesus” who has come to establish his Millennial Kingdom.

That being said, how does the Protocols book support their scripting?

By presenting the Protocols as a Satanic blueprint for installing an Antichrist King of the Jews, the book will be used to support claims that Putin is the Antichrist after he is proclaimed the Jewish Messiah (the “Moschiach ben David”). So this book supports the Phase 2 programming that will lead people to accept the “Kabbalah Christ” as the “real second coming of Jesus Christ.”

Before I began this entry, I did an initial scan of the Protocols to get a first impression of their true nature. And based on that, I was left thinking that they may actually be “genuine,” but were written by Kabbalists, not Satanists. So as I read through them, I’ll be asking myself the following questions:

Do I see any references to Satan or Satanism?

Does this sound like something a Satanist would write, or does it sound Kabbalist?

Were these Protocols written to explain to other members of the “cabal” the real Plan for installing a world god-king, or were they written as a disinformation piece to be leaked to the public in support of Phase 2 of the Plan?

If the Protocols reflect the real Plan and are Kabbalist, is the Satanic angle suggested by the producers of the book an attempt to take a damaging exposure and spin it into an asset in fulfilling a new two-phase version of the Plan?

Before we start reading the actual Protocols, though, we have a few more clues to glean from the preface and introduction presented by the book. We’ll examine those in the next addition.

And to the Hidden Hand, I say this: EVERYTHING that is based on lies will fall to dust; only those things revealed in full truth and in the light of day have a chance of standing. And so it is.