Having them tie the reheated threat of a Greek default to the date of the Brexit vote on June 23 confirms what I suspected last year: that the globalists were all set to begin the demolition of the EU on June 22 of 2015, but they pushed the one-year delay button at the last minute. To see how this played out, let’s go back to what I wrote in last year’s Globalist Agenda Watch as we approached June 22…

Looking to the first bullet point, it played out exactly as expected. This was the cluster of headlines carried by Drudge on 6/15/15… 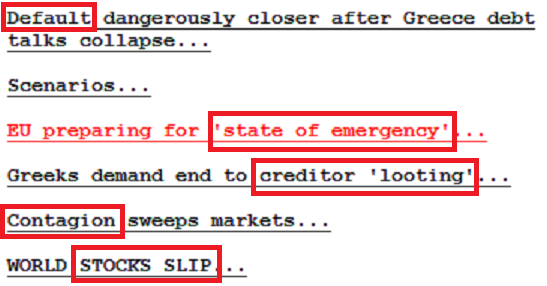 The Waterloo tie-in of the second bullet point was also fulfilled on 6/18/15 by a Frenchman named Benoit Coeure. This was my coverage of it…

Waterloo all over again: a Frenchman drops a bomb on Greece’s banks

Here is a little excerpt from Update 28…

“On a historic side note, June 18 is the 200th anniversary of the Battle of Waterloo. It commenced with a French attack (at Hougoumont). Also, the number 18 is the sum of 6 + 6 + 6. Will the EU’s Waterloo begin with an attack on Greece’s banks on the 18th? Who knows, but it’s a date to watch. The ELA card can be played at any time starting today.”

Wouldn’t you know it, the ECB — specifically citing a French executive board member named Benoit Coeure – leaked to the press that Greece’s banks may be unable to open on Monday. Needless to say, such a suggestion will send every Greek to the bank tomorrow to withdraw funds. So it appears that the EU’s Waterloo began with a French attack, just like the last one.

But when it came to Monday morning, 6/22/15, the globalists suddenly pressed the abort button on their plan to implode the Greek banks…

In the weeks that followed the Greek delay, we observed the globalists also enact one-year delays on the implementation of the new SDR basket and the handover of internet governance. And now that we’re approaching the one-year mark on Greece, we see the globalists resurrecting the threat of a Greek default and tying it to June 23.

Looking to what’s ahead, I see the globalists dealing a one-two punch to the European Union. The first will be a political blow when the vote counters/manipulators announce that Britons have voted to leave the EU on June 23, and the second will be a financial blow when the Greek economy implodes no later than July 20.

As we look into all this, it’s important to remember that the European Union was never meant to last. The only way the globalists could take down all the nations of Europe on cue was to lash them together under one currency, then crash the currency. This was always the true intent behind the adoption of the Euro, and this was the reason the globalists left their strongholds of England and Switzerland out of the currency. Unless the globalists press the delay button once again, the Euro will not exist by the end of this year.